The rain held off and over 75 persons attended the 22 nd Union over a three-day period (June 21, 22, and 23) at Mountain Empire Community College, Big Stone Gap. Thanks to the expertise of the Mountain Empire Community College’s IT Department, we were able to visit with Adriana Trigiani by Skype. Thank you Mary Trigiani for being there in person and the remarkable dialogue with your sister.

There were many other wonderful speakers including Forest Hazel and Marvin T. Jones on Thursday. They both spoke of community and place in North Carolina. Friday’s trip to Vardy was good as usual where DruAnna Overbay spoke of the special place that is the Vardy Community. I am always reminded of how progressive the Vardy School was, much ahead of the county schools at that time with progressive teaching methods, nursing care, and hot lunches.

The Friday evening meeting at Southwest Virginia Museum was just as special when MHA honored Dr. Brent Kennedy with a plaque for his foundational role in Melungeon history and research and the Melungeon Heritage Association. Thanks to all those who spoke in support of—and their association with–Brent, including Shirley Hutsell, Julie Williams Dixon, President Emeritus S. J. Arthur, Brent’s wife Robyn, and his brother Richard (Richie). Thanks to the Museum for their partnership with MHA and their hospitality. And, thanks to Rose Trent and granddaughter, Emerald, for work on the reception and for their presence in what was a busy and stressful time for them otherwise.

Saturday started with a welcome by host, Michael Gilley of Mountain Empire Community College followed by Adriana Trigiani appearing by Skype. Dr. Terry Mullins brought his own family migration to life in the physiographic Ridge and Valley Province of the Appalachians. (I always like learning about Burkes Garden and the people associated with this unique landform.) We were indeed glad to have Dr. Arwin Smallwood back after a few years absence. Arwin is the
expert on Tuscarora migration. Paul Johnson and Julie Williams Dixon spoke on Lost
Communities and the Goinstown Community in North Carolina. Julie’s video was excellent, and to added to our knowledge of Goinstown. Carla Harper spoke last and led a discussion related to Goinstown. I am again reminded of the role of the NC-VA border area in western migration of Melungeon and other mixed-ancestry peoples, some moving on to Tennessee and Virginia mountain valleys and ridges and others finding a niche and putting down roots in the North
Carolina piedmont and mountainous New River Valley.

In the general meeting, we welcomed Heather Andolina of Underbyte Productions who spoke of her exciting Melungeon film project. We discovered, too, that Andy, Heather’s brother, uses drone technology to great effect. The meeting continued with suggested ideas for programs and future emphasis for unions. It is not unusual at all that people should have different ideas. That is a positive because it makes MHA a vibrant, innovational organization. I came away from the meeting with the idea that programs must provide a balance of speakers with different styles and
with different subjects. I look to members such as Dr. Kathy Lyday, Lisa Alther, and others to provide professional literary criticism of Dromgoole and others who have distorted and prejudiced views of Melungeons.

It was a good weekend in Big Stone Gap and, speaking for the Executive Committee, I thank everyone who attended. Thanks to Mountain Empire Community College and all those who partnered with us. Now it is time to begin planning for 2019!

Although a schedule conflict found Adriana in Seotland on June 23, her presentation via Skype was very well received at Mountain Empire Community College for the 22nd Melungeon Union. 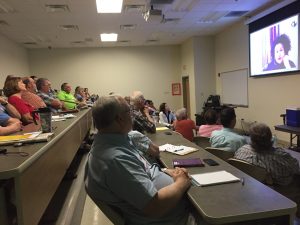